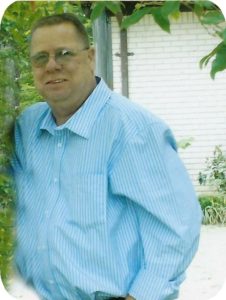 Roger Lloyd Crabb, 57, succumbed to the calling of the Lord Tuesday, July 17, 2018 He was born February 13,1961 at the 93rd Army Hospital Frankfurt A’ Mien, Germany the son of Billy L. Crabb and Anna Mae Crabb.

He was the second of four children and as a military child Roger maintained dual citizenship until he was 16 at which time he declared himself as an American Citizen and dropped the German citizenship. He spent most of his childhood in Aurora, Colorado where he became passionate about four-wheel drive, mountain climbing, NASCAR and The Denver Broncos.  He also learned to ride dirt bikes in the mountains of Colorado; he enjoyed running and basketball and was a Member of the Hash House Harriers, running cross country weekly with his wife Mellody.  Roger moved to Arkansas with his family after his father retired from the Army. He graduated from Bryant High School and worked for Patterson Supply for many years until they sold out.  Roger was a devoted husband to Mellody Brackemyer and step-father to her grown children Dale, Jill and Daniel to whom Roger was very close. Roger had 11 step-grandchildren and 2 step-great granddaughters. Roger went to work for Office furniture Supply when the company first started and became a valuable member of the Office Furniture Supply Team and was well loved by all there. He will be missed there by many.

Roger was a man with many friends which he cared for and loved with all his heart. He was a devoted Christian man that lived his life for God, his family and his passions. He was a loving husband, brother, uncle and friend. Even in death shows his generosity as an organ donor so that others may be blessed. Love, faithfulness, honor and generosity are the hallmarks of Rogers life.

He is preceded in in God’s Eternal Rest by his parents, a sister Pamela and a step-son Daniel.

Roger leaves behind his loving wife Mellody, step-children Dale and Jill, two brothers Kevin Crabb and his wife Cindy and Leallen Crabb and his wife Anne; uncle Mark Weeden and his wife Barbara and a host of nieces, nephews and friends. He was loved by many and will be missed by more. Gone but Never Forgotten God’s grace and mercy. Amen on-on