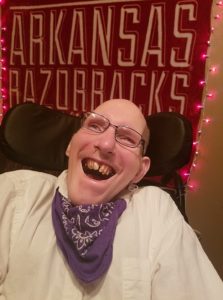 He is also preceded in death by his step mom Kathy Sharp Martin and an aunt Lois Kelley.

Jerry was proud to be an honorary North Little Rock Police Officer, he was an avid Razorback sports fan and loved making people smile.  He also enjoyed getting all dressed up and going people watching.

A family hosted celebration of life will be held on Saturday, September 1, 2018 at the Lonoke City Park located at the 400 block of Center Street in Lonoke.  The family would like to ask that everyone wear their Razorback attire.  In lieu of flowers, donations may be made in Jerrys honor to the NLR Police Department community police division.