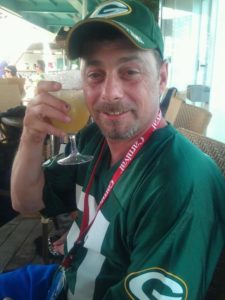 John Walter Yurkunas, age 51, passed away peacefully in his home on Friday, August 3rd, 2018. He was the husband of Teresa Yurkunas. They shared 16 wonderful years of marriage together.

He was born January 1st, 1967 in Champaign, IL. He was the son of Bonita and Valentine Yurkunas, and had a sister, Valentina.

John served in the United States Army. He was a dedicated employee for 16 years of Arkansas Blue Cross and Blue Shield.

John enjoyed spending time outdoors, and playing with his four dogs. John enjoyed playing pool with his son Matthew and darts with his son Aleczander. He loved having talks on the porch with his daughter Candace. He would play basketball with his grandsons Dylan and Dennis, and have playful jokes with his granddaughter Summer. He loved rock music, and enjoyed going to concerts with his wife. On a nice day, he would be found outriding his motorcycle. John loved sports, and watching the Razorbacks football with Daphnie. John also loved to go on cruises with his family with a most recent Alaskan cruise being his favorite. He and his wife loved each other unconditionally and will forever be intertwined together by a tattoo on each other’s heart.

His online guestbook is available at www.anaturalstatefuneralservice.com. He will be loved and missed by many but never forgotten.