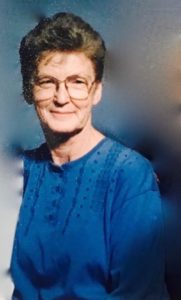 Jacqueline Kay Turner, 80 of Vandervoort, Arkansas passed away on Wednesday, September 5, 2018. She was born on July 26, 1938 Grand Rapids, Minnesota to the late David Jerald Bergstrom and Susan Margaret Johnson.

She is survived by two daughters Katherine Johnston and her husband Rex, Katrina Hendricks and her husband Michael, and two sons Joe Turner and Kelly Turner, nine grandchildren; Larry Carver and wife Debbie, Douglas Turner, Eric Carver and wife Lucy, Jessica Turner, Krishna Turner, Nicole Carver, Cody Turner, Colton Hendricks, Conner Hendricks, Loretta Johnston and eleven great grandchildren including her great granddaughter Aubree whom she was so proud to be raising. Numerous nieces and nephews, and other family and friends.

Jackie was a day care owner and operator, she loved the kids she cared for and they loved her as well. She was a member at Vandervoort, First Baptist Church and proudly served on the city council for many years.  She also was a volunteer at the local polling station.

A family hosted celebration of life will be held at a later date.