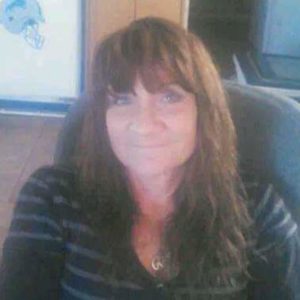 Terri Diane Mayne, 52, of Paragould, Arkansas gained her wings September 7, 2018 at the Flo and Phil Hospice Home in Jonesboro, Arkansas.  She was the daughter of Manuel and Beverly Drain, born December 19, 1965 In Bellflower, CA.

She is survived by her daughter Danielle Kisner of Jonesboro; son PVT Timothy A Mayne II of the U.S. Army; the love of her life granddaughter Emma Kisner; her sister and brother in law Stan and Kitty Lemmons of Heber Springs; and brother and sister in law Randy and Shawn Drain of Nevada.

She was preceded in death by her father Manuel, mother Beverly, and sister Karen Lavine.

Terri was a loving mother, nana, sister and friend. She will be greatly missed.