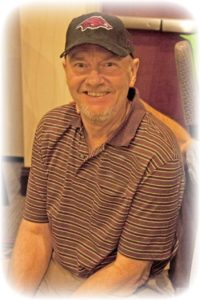 Jackie (Jack) Lynn Calhoun, 62, of Jacksonville, Arkansas passed away on Monday, November 12, 2018. He was born on August 19, 1956 in Lonoke, Arkansas to George Calvin (Red) Calhoun and Billie Ruth Dulaney.

He was an avid sports fan and was passionate about the Arkansas Razorbacks and Dallas Cowboys.  He loved NASCAR but his greatest joy was being “Pawpaw” and attending all the grandchildren’s sports activities and spending all the time he could with them.  He was a Master Electrician for over 30 years with Arnold and Blevins Electric.

He is preceded in death by his father George (Red) Calhoun.

Visitation will be held on Wednesday, November 14, 2018 from 6 – 8 p.m. at A Natural State Funeral Service, 2620 West Main Street, Jacksonville, Arkansas.

Donations can be made in his honor to https://www.psp.org/iwanttohelp/

Arrangements have been entrusted to A Natural State Funeral Service, Jacksonville, Arkansas. 501-982-3400.