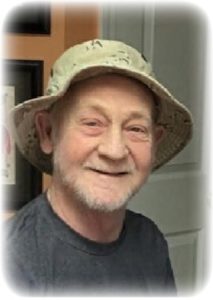 After many months spent bravely battling lung and liver cancer, Lewis Don Goforth, age 62, of Cabot, AR passed away peacefully on Wednesday, October 31, 2018, surrounded with much love by his daughter, Joy Thomas, son in law, Chris Thomas, and his niece, Renea McKenzie. He was a man who lived life on his own terms, as authentic as the sun that rises every morning. He would give the shirt off of his back to help a friend, and never missed a chance to call his beloved Hogs from his couch on game day. His garden was the thing of legends, keeping friends and family well stocked in free organic vegetables throughout each summer. Known to frequent a few fishing holes in his time, it has been said that others still hope to find half of the luck that he had in his propensity to bring home a cooler full to fry. We will sorely miss his quick wit and entertaining sense of humor, as well as those sparkling blue eyes that spoke to your soul without saying a word. Preceded by his parents, William (Bud) Lewis and Edith Natalie Goforth, as well as his youngest daughter, Dawn Goforth, he is honored by his daughter and son in law, Joy and Chris Thomas, and three grandchildren, Paige, Trent, and Dan Owens. His oldest brother, Charles Goforth, passed on before him, and he is survived by his siblings, Linda McKenzie, Sheila Dixon, Rickie Goforth, and Tina Sheridan. He chose to be cremated with the single request that we set him next to the urn of the ashes of his faithful and beloved one-eyed dog, Lucky. There will be no formal memorial service, as all who loved him will fondly remember him and his genuine smile deep in their hearts forever.