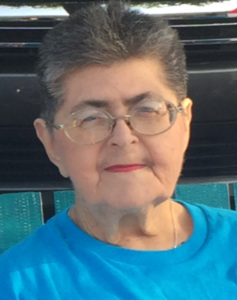 Sharon Lynn “DeCamp” Peters earned her angel wings on Monday, November 26, 2018. She was born February 12, 1941 in Muskogee, Oklahoma to William “Jack” DeCamp and Hattie “Hamblin” DeCamp. Sharon grew up in Muskogee where she met and married Andrew “Jack” Peters October 24, 1961 where they lived and raised their three daughters. The couple moved to Jacksonville, Arkansas in 1984 where Sharon started working at The Little Rock Air Force Base in housekeeping. Sharon later became a CNA at Beverly Nursing Home and then at Rose Care Nursing Home where she retired from in 2001.

Sharon loved spending time with her family and was a member of the Church of Jesus Christ of Latter Day Saints. She was known for her bright smile and always had a hug for everyone. Simple things made her happy. If you ever shared a story with her about something good and positive, she always exclaimed “Fantastic” or if you offered her a favorite food, she’d say “Oh Gosh Yes.”

She was outgoing and friendly and enjoyed meeting new people and talking with them, and she ended every conversation with “You have a blessed day.”