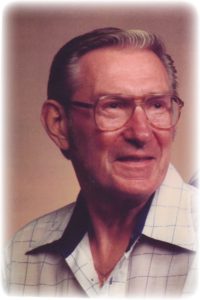 Bill was born October 14, 1930 in Wausau, Wisconsin to Fred and Margaret (Borth)Seidler.  He was baptized and confirmed at St. Stephan’s Lutheran Church in Wausau, Wisconsin. He was a member of St. Jude’s Catholic Church of Jacksonville, Arkansas.  He grew up on a farm in the town of Stettin and went to school on the corner of O and U; the little red schoolhouse now resides in Marathon Park.

Bill married Elaine “Peachy” Reetz on August 9, 1952 in Pine City, Minnesota. He worked at Northern Mattress Company and Able Plumbing and Distributing as a counterman in Wausau, Wisconsin.  He was transferred to Montevideo, Minnesota in 1969 to start a new branch and then to Jacksonville, Arkansas in 1975 as a warehouse manager and retired in 1992.

Bill and Peach loved to fish and spent summers at their West Norway Lake summer house.  He also hunted and had an interest in family history, wrote stories and had two poems published.

Bill was preceded in death by his wife and parents; a son Michael; four brothers LeRoy, Theodore, Fred, Jr., and Gerald.

Funeral Services will be held in Wausau, Wisconsin.