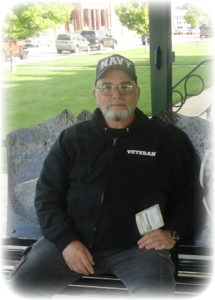 Pastor Steven Winford Hudson was born on October 24, 1961 to Thomas and Clara Jane Hudson in Malvern Arkansas.  He grew up in Leola where he had great memories, but spent his final years in Bryant AR.  He went to be with the Lord on December 11, 2018.  He was Pastor at Hwy 5 Baptist Church for 18 years where he served the Lord faithfully.

He was preceded in death by his Father Thomas W. Hudson and loving Grandparents and many aunts and uncles.  He leaves the love of his life Jessica of 11 years, loving children Steven-Bo (Sharon), Andrew (Kiristi), Tiffany and Hunter, mother Clara and two sisters Janey and Cheryl (Randy), in laws Kenny and Janet Brady, brother and sister in laws Jeremy (Maria), Genger (Takota), 11 nieces and 4 nephews that loved Uncle Steve very much that will carry on his memory.

He also served the United States in the Navy from 1979 to 1992 where he received the rank of Petty officer Aviation Structural Mechanic 1st Class Air Warfare specialist Command Career Counselor.  He loved working on airplanes on the USS Midway and made so many lifelong friends that will miss him greatly.  Steve touched so many lives in his ministry as a pastor with his wisdom and teaching that I am sure in heaven he has a line of people thanking him for his love and words.

We will be celebrating Steve’s life at Hwy 5 Baptist Church on December 29th, 2018 at 3pm.  We will have Bro. Learthur Shelton officiating and a dinner in Steve’s honor to follow.  Steve’s marker will be placed at the Little Rock National Cemetery with a private family service in the months to come.  Steve will have his final resting place on the Midway, San Diego, CA.  In lieu of flowers Steve would like donations given to Hwy 5 Baptist Church, 7728 Hwy 5 North, Alexander, AR 72002.