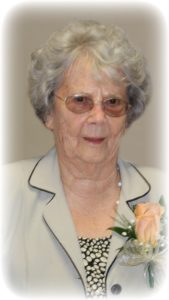 Barbara Rose (Stephens) Britton, born April 11, 1925 in Poplar Bluff, MO to Albert Benjamin and Sally Lorena (Conover) Stephens, went to be with the Lord on Sunday, January 27, 2019 in Little Rock, Arkansas. On March 24, 1951 Barbara married James Harrison Britton and they enjoyed 63 years of marriage together before his passing in 2014.

In her earlier years, Mrs. Britton worked in the shoe factory in Poplar Bluff, MO and sang gospel music with her sisters, The Stephens Sisters. The Britton’s opened a small grocery store, J & B Market, on Hwy W and the store was a connection to many families in the Agee Community of Poplar Bluff. Barbara was a strong Christian, faithful wife, and loving family member. She chose to give much love to many, touched many lives, and will be missed greatly.

A Celebration of Life service will be held at 11:00 a.m. at Agee Fellowship Church on Hwy W in Poplar Bluff, MO on Wednesday, January 30, 2019 with a visitation held one hour prior to the service.