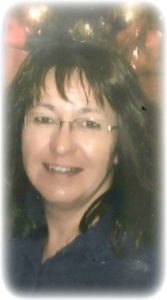 Debra Marie (Millis) Bartlett, 61, of Ashdown, Arkansas went to be with the Lord on January 10, 2019. Her determination, strength and spunk showed right up to the end in her fight against the cancer that ultimately took her.

Debbie always loved animals, and her world revolved around her little doggies Pee Wee and Lily and feeding all kinds of wildlife in her wooded yard in Ashdown (and she always reminded her neighbor Don that she was not fattening them up for his pot!).

Debbie worked a variety of jobs. One of her first was sewing sleeping bags, where she excelled and developed her love of sewing.   She enjoyed working at Millwood State Park, where she made many long-lasting friendships. Her shenanigans with her co-workers and campers provided entertainment they still talk about today.  She worked at Wal Mart for the past 11 years, and many of her co-workers and customers are counted as friends.  She and Val were like-minded partners-in-crime.

Debbie’s family is grateful for the community of friends that have been there for her over the years, driving her to the Emergency Department in Little Rock numerous times, to her doctor’s appointments and chemo treatments, feeding her stray cats, birds and wildlife and taking care of her beloved dogs Pee Wee and Lily, singing karaoke and going with her to her favorite Chinese Buffet, taking her to do chores when she could no longer drive, and all the “adventures” that went along with those outings.  A special thanks to Vern, Charlie and Jerry,  Reba, Gene and Karen, and the many others who made an impact on Debbie’s life.

There was never a dull moment when Debbie was involved, and you always knew what was on her mind.  She could make anyone smile with her quick wit and sense of humor.  She enjoyed all kinds of music, and had a lovely voice.  Her independence came later in life, but she defended it ferociously and we are so proud of her.  Debbie didn’t always have an easy life, but she had a good life and earned her place in heaven.

A memorial service will be held in Ashdown, Arkansas at a later date.  In lieu of flowers, donations can be made to Arkansas Hospice (#2 St Vincent Circle 7W, Little Rock, AR 72205), where they took such great care of Debbie in her final weeks, or Second Chance Pet Adoptions, (6003 Chapel Hill Road, #133, Raleigh, NC 27607), who will assist in finding a new home for Pee Wee and Lily.