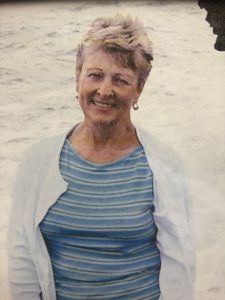 Bonnie Joyce (Ropp) Rider, 75, of Hot Springs Village, Arkansas, died peacefully in the presence ofher loving family on Friday, February 8, 2019. She was born in Washington, Illinois on July 4, 1943 to her late parents, Lawrence and Edna Ropp.

Her “career” was a full time Mom, not only to her own two daughters but to all the children in the neighborhood who were never too hesitant to address her as “Mom”. She also became a professional “Mom Helper” as grandchildren entered her life.

For the past few years she battled the scourge of Alzheimer’s which led her to and extended family of caregivers. First was a lengthy stay at Brookfield Memory Care facility in Hot Springs, Arkansas and then as the care needs became more demanding, she moved to Abundant Life Care Home near Hot Springs Village. All of the caregivers at Abundant Life are true Angels on earth who loved her as their own family. She also was receiving excellent and loving care from the staff at Kindred Hospice.

Despite the devastating effects of Alzheimer’s, one thing that disease did not take from her was her ever present smile. All who met her could always expect a warm and loving smile from her. She is smiling now at all of us left behind.

Memorials can be made to the Christ Lutheran Church Capital Campaign.