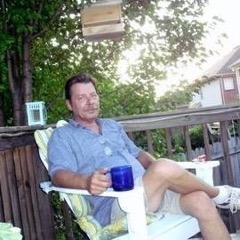 Nicholas was the first child and only son of Guston Evan Holloway of the U.S., and Marjorie Doreen Smith Holloway, of the U.K., a fact which he took great pleasure in reminding his sisters of as frequently as possible.

He is survived by his doppleganger-son, Jason Alexander Holloway, and his daughter, Layla, of Glasgow, KY; and his beautiful daughter, Rebecca Nicole Holloway Woods, and her husband Ben Woods of Shelbyville, TN, along with their children Chase, Kayla, Bailey, Cammie, Benjamin, Nathan, and Brodie. Nick was extremely proud of his children.

Nick adored his kids. And their kids. He welcomed each child, then each of their children, with great love, and the optimism that they might share his concern with the condition of the chrome on his Harley. While they apparently have not yet found the value in properly polished chrome, he had hope. He also had rags. Lots and lots of rags. And fancy shmancy chrome polish.

The eldest of four siblings, Nick is survived by his sisters Jennifer Holloway; Patty Holloway Johnston, and her husband Joe Johnston, all of the Nashville area; and Julian Holloway, along with her husband Alan Perry, of Fairfield Bay, AR. Nick was the tallest. And he got the good hair.

He was the fun uncle to his nephews, Benjamin Goodwin, Mickey Johnston, and Jack Johnston, all of Tennessee, Sidney Holloway Perry of Little Rock, and to his niece, Janna Perry-Holloway Haller of New Orleans.

Nick also leaves behind his devoted and loving other half, Laura Markum, of Cabot, AR.

He loved big bikes and tiny dogs. He loved a good biscuit. He loved long rides to nowhere in particular, tinkering in the garage, and warm, sunny days. He loved the Three Stooges, long hair, loud mufflers. And thick, clean, white socks. He loved good pie and bad coffee. He loved Christmas Mass. And he loved his Harley. Mostly, though, Nick loved, and was loved fiercely by his family.

The family will hold a private memorial service on Anna Maria Island, Florida.

Donations to honor Nicholas Holloway may be made to Anna Maria Island Turtle Watch and Shorebird Monitoring, at www.islandturtlewatch.com.

In lieu of donations, please think of him fondly the next time you notice some nicely polished chrome.