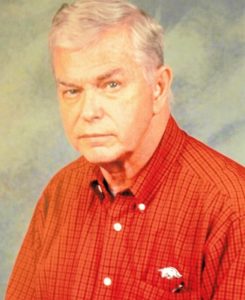 Gordon Elton Thorn, 73, of Jacksonville passed away on June 20, 2020.  He was born in West Palm Beach, Florida on August 5, 1946 to Clive Gordon and Dorothy Margurite (Hirschey) Thorn.

He was a member of the Jacksonville First Assembly of God, Jacksonville, Arkansas and a very active member of the Jacksonville Senior Citizens Center.  He played on the Bean Bag Baseball team for the Senior Citizen Center.  He served in the United States Navy straight out of high school; he then went on to work for the cruise lines and became a Registered Nurse later in life.  He was known as a jack-of-all-trades who enjoyed being with family and friends but his greatest joy was spending time with his grandchildren and great-grandchildren.

He was preceded in death by his father, Clive Gordon Thorn; sister Kathleen Harris and son-in-law Pete Crowly.

A family hosted memorial will be on Monday, June 29, 2020 at 10:00 AM at Jacksonville First Assembly of God, 221 North Elm Street, Jacksonville, Arkansas. Pastor Royce Lowe will be presiding.

In lieu of flowers donations can be made to the American Cancer Society.

In light of the current health concerns, Gordon’s family thanks you for your thoughts and prayers if you are not able to attend the service. Please be aware, as per Arkansas directives, wear a face covering to attend and social distancing guidelines will be in place.

You can view the tribute video by clicking the link below:
https://www.tributeslides.com/tributes/show/9STJ843KMYWYC59Z