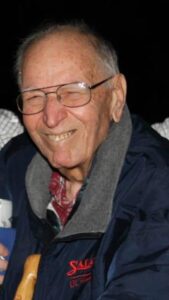 Carl was a devout Catholic who loved his family very much.  he loved to have his family over for meatballs or BBQ and then beat them at a game of cards.  His chuckle as he wins will be sorely missed. He proudly served in the United States Air Force and later worked as a distributor for Miller Lite.

He is survived by a son Forrest Fair, five grandchildren; Angie, Carla, Scott, Joel and Kimberly, and great-grandchildren; Lacy, Laine, Jackson, Jenna and Isabelle as well as a host of other family and friends.

Carl is also preceded in death by his wife Mary Grace Casciola, a daughter Mary Susan Casciola and a son Laine Fair Casciola.

The family would like to give thanks to Kindred Hospice and the Presbyterian Village for the excellent care during this difficult time.

Per Carl’s wishes there will be no services at this time.