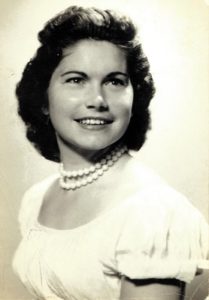 She was the daughter of William Harvey Sanders and Emma Trantham Sanders of Monticello.  Hazel was preceded in death by her parents and brothers Arthur, Willie John and Bob Sanders.

Hazel Potts, a graduate of Drew Central High School, was a twenty-year USAF military wife who proudly raised her family, without complaint, throughout the many relocations and other demands made on military families.  After retirement, the family moved back to Monticello where she was employed as Office Administrator to the plant manager of Burlington Industries.  This was while her husband, James Potts, attended dental school.  She later worked as Office Manager of his Monticello dental office for many years.

Hazel loved the Lord and spent most of her time studying His teachings and witnessing to others.  She loved and enjoyed sending cards to just about anyone who knew her, both as a sign of friendship and as an expression of her Christian love.

She was a long-time member of Eastside Baptist Church where she was a very active member for as long as her health allowed.

A private service will be set at a later date.  The family requests no flowers or gifts, but that contributions be made to the charity of your choice.  The family gives special thanks to Dr. Tim Simon and staff, Hospice Home Care and a special caregiver, Angelia Lytle, for their kind assistance.