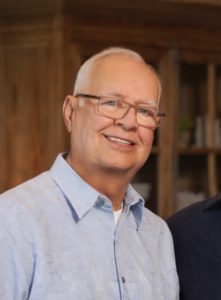 James Donald (Jim) Clements, 73, of North Little Rock, after a hard-fought battle against heart disease, he passed from this earthly life to join his heavenly Father on July 19, 2020.

Jim was born on September 17, 1946 in Malvern, Arkansas to James Albert Clements and Irene Manning Clements. He grew up in Malvern on Sullenberger Avenue.

He returned to Malvern for several years. Early in life Jim learned the value of hard work and integrity as evidenced by the fact that he worked nights at the state hospital in Benton to pay for his education at Henderson State University where he attended classes during the day.  He graduated with a Bachelor of Arts in Psychology from HSU in 1972. The long hours of working and studying paid off.  After graduating, he relocated to Houston, TX to pursue career opportunities.  It was in Houston he met and married Katherine Syata, the mother of his only child Sarah Louise.

For over 35 years he was one of the principals of Marshall Clements.  MC Interiors brought a sense of style and beauty to many homes and businesses in Arkansas and surrounding states.  Jim loved to travel the world to search for one of a kind antiques and home furnishings.  His quests for beautiful antiques and artifacts took him to Europe, South America, Asia, Africa and the Middle East.  These travels afforded him the opportunity to gain vast knowledge of the history of art and design.  His voracious appetite for knowledge and his love of travel as well as meeting new people and trying new cuisine, were very fulfilling to him.  Through all the bleakness in this world, Jim was a man who could see the beauty in just about anything down to the slightest detail. He was a true artist and loved to share all of the knowledge he gleaned, with anyone willing to listen. Jim’s sense of style, his drive for perfection and his love of people made him an immensely popular designer.

Due to his failing health, he closed Marshall Clements.  He spent the last two years of his life living with his daughter, son-in-law,  grandchildren, and their faithful four-legged companion Alley. “Poppy” was a character…full of laughter and love, and rarely told the same story twice. He was always there, observing, joking, giving his honest opinion. He loved being around people and hearing their stories.  Friends and family will always remember him for his warm smile, hearty laugh, and wicked sense of humor. We will miss him forever.

Jim loved life. His headstrong nature was the force behind a hard-fought battle to live.  His failing body encouraged him to push harder. His positive attitude and his willingness to try new therapy, radical surgery, anything to extend and hopefully improve his quality of life set a solid example to those around him.

Jim received an LVAD heart pump implantation in early 2018.  Through his many visits to St. Vincent Infirmary “Hey there, Mr. Clements!” could frequently be heard from the valets at the hospital entrance, the custodial staff, as well as his team of doctors and nurses. We express our sincere gratitude to each and every one who took the time to make Jim’s day a little easier and his environment a little brighter. We wish to convey our tremendous gratitude to Jim’s extensive team of doctors and nurses–especially the St. Vincent LVAD Team.

Due to the restrictions related to the ongoing pandemic, a memorial service will be held at a later date.