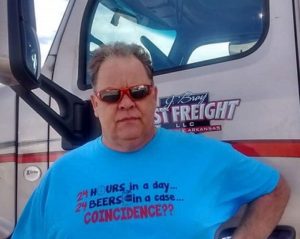 James Michael Krueger, 55, Our beloved Cap’t, was called home on Monday July 13th 2020 at 10:32 AM.  James was a million-mile warrior by land and sea, having survived the roughest of roads and waters, he loved nature and saw more of it then many ever will.  He was never afraid to lend a helping hand to a person in need and he would do anything for a child.  He was an intelligent man from mechanics to home remodels James was the man to ask, He was always eager to share his knowledge with others.  He always had the answer to your worst problems. It was a privilege to know him but to be part of his life was an honor.

James is survived by his Mother Shirley Krueger; his wife of 20 years, Angie Krueger, of the home; his children, Cheryl, Sean, Cher, Karen, Robert, Becky and Cheyenne; his siblings Teresa, John, Jason, and Tamara; 17 grandchildren; many nieces and nephews’, cousins and extended family.

James was preceded in death by his father John W Krueger II, his two brothers Robert and Fredric.