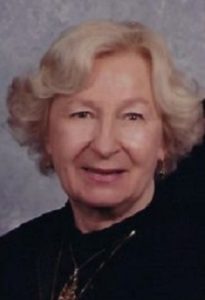 Janice “Jan” Dewey died peacefully on Sunday, June 28. She was 91. Janice was born in Brooklyn, New York to Elizabeth (Bader) and Henry Reimer living her childhood in Chicopee Massachusetts, then graduating high school in Medford, Massachusetts. She worked as a secretary in Boston before moving to Holyoke, Massachusetts with her family. There she met Robert Dewey. It was love at first sight and they married soon after meeting. Their “song” was always “Some Enchanted Evening”. She lived in South Hadley, Massachusetts where she raised her daughters, JoAnne and Lynne. She and Robert lived for a time in Sharon, Vermont before retiring to Cape Coral, Florida where she and Robert lived for 30 years. Jan recently moved to Conway, Arkansas to be close to her eldest daughter, JoAnne, and her grandchildren’s families.

Janice was part owner and sat on the Board of Directors for Statewide Painting Contractors for 35 years also serving as Business Manager. She was involved in many benevolent organizations, most notable, she was a lifetime member of The Daughters of the Nile as affiliated with The Melha Shriners of Springfield, Massachusetts. Her gratitude to Shriners Hospital in Springfield, Massachusetts is eternal. Jan served as past President of the South Hadley Women’s Club, was a Gold Card member of the Italian American Club in Cape Coral, Florida and volunteered with many other organizations and activities. She enjoyed boating with her family and had been a member of the Middletown Yacht Club in Connecticut for many years.

There will be no services by her request.

Interment will be held at a later date at Forestdale Cemetery, Holyoke, Massachusetts.

Memorial contributions may be made to Shriners Hospital in lieu of flowers.