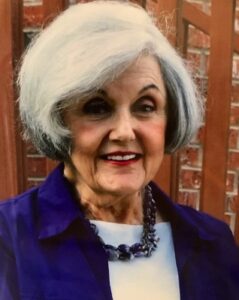 Always fiercely independent and intelligent, she took it upon herself to add the “e” to her first name while in elementary school.  After graduating from Berryville High School and Ouachita Baptist University, she moved to Little Rock in 1962. It was there she met and married Bruce Carter, who had seen her at Second Baptist Church. Together they have two children—a daughter Missy and a son Scott.

After teaching history and English to high school students for fifteen years, she changed careers in the late 1970s and sold insurance and later office supplies.  But the teaching profession lured her back. After getting her master’s in history from UCA, she taught world history as part of the faculty there for many years. She had very high standards for herself and her students; but she was very interested in helping her students succeed.

A lifelong Baptist, she was a member of Second Baptist Church and proud of the progressive stances it has long taken on social issues.

She is survived by her husband Bruce, daughter Missy, and son Scott. She is also survived by a brother Charles Grim, sister Sheri Crauswell, her Carter in-laws: Audrey and Billy Hairston, Robert Carter, and Dale and Jimmie Carter as well as numerous other relatives and many friends. She was predeceased by her parents and a sister Janet.

Per her request (and the threat she would come back and haunt if it was ignored), there will only be a private service.  She will be interred at the Roselawn Mausoleum, so people wishing to visit her remains in the future are encouraged to do so.