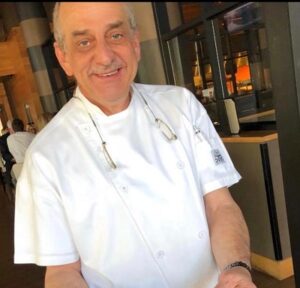 Marshall John Smith, 65, passed from this life unexpectedly on Sunday, July 26th. The loss is immeasurable but so is the love left behind. A man with a kind heart and infectious laugh. He lived his life passionately for his family and friends. His love of good food and wine permeated almost everything he did.

As Executive Chef at Samantha’s Tap Room and Wood Grill, he was creative in the kitchen. As a self-taught chef, he developed his skill set as Executive Chef at Hamilton House in Hot Springs for 35 years. His wealth of knowledge and attention to details were showcased throughout his career as Executive Chef at So Restaurant-Bar, Arthur’s Steakhouse and most recently Samantha’s Tap Room and Grill. Among his many achievements and accomplishments, he received AAA Four Diamond Reward and publications of original recipe in Bon Appetite Gourmet magazine. Most recently, he proudly represented Arkansas in the Great American Seafood Cookoff in New Orleans, placing 2nd place among 13 states.

He is preceded in death by his parents Dr. William E. Smith and Jacquelin R Smith, and his sister Dr. Marion Smith (Long).

He survived by his wife, of 45 years, Kathy Smith; his son, William (Bill) E. Smith, IV; his daughter Katherine; his grandson Klien; a large and boisterous family of four sisters and a brother, their spouses, nieces, nephews, grandnieces and grandnephews.

A service is planned on August 14,2020 at noon at St. John Catholic Church in Hot Springs. A rosary will be recited starting at 11:30am. All are welcome.

A private family inurnment of his cremains will follow at Crestview Cemetery.

In lieu of flowers, donations can be made to the Marshall Smith me memorial fund at Gofund.com help with his family with expenses…