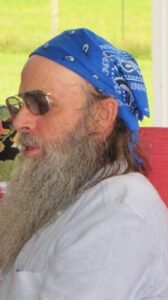 Walter Keith “Skeeter” Money age 65, of El Dorado, Arkansas passed away at his home on Monday, July 27, 2020. He was born in St. Louis, Missouri, on May 31, 1955 to the late Dale Leonard Money and Eloise Darelyne Mc Leod-Money.

Keith was a loving son, brother, and friend too many. He enjoyed, playing poker and watching the St. Louis Cardinals. He was also an avid Trump Supporter and proudly served his country as a Sergeant in the United States Air Force. He became a Carpenter by trade and was a very skilled craftsman.

He is survived by his siblings; Randy Money, Kathy Martin (Gordon), Shirley Wheeler (Steve), Danny Money (Sherry), Vonna Money, and a host of nieces, nephews, and many other family and friends.

He preceded in death by his parents and his brother Raymond Money, a sister in-law Corliss Money and a brother in-law Buddy Wheeler.

A family hosted Celebration of life service will be held on Tuesday, August 11, 2020 with visitation from 4 – 6PM and service to follow at 6 at Apple Hill General Baptist Church, 2689 Hwy. 319 West in Austin, Arkansas with Pastor Shawn Money officiating. In lieu of the flowers the family would appreciate donations be made directly to the funeral home to help with his services. Keith’s remains will be laid to rest at the Arkansas State Veterans Cemetery in North Little Rock, Arkansas along with both his parents.