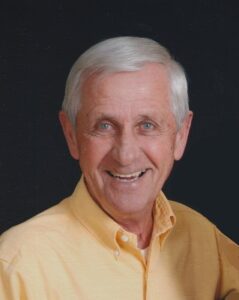 Bob was born on October 3, 1942 to Dr. Raymond and Mary Mayer in Memphis, Tennessee. Though he grew up in the city, Bob spent summers with his maternal aunt and uncle on their farm in Illinois, where he developed a love for rural life unlike that of most urban teens in the ‘50s. A true prankster, Bob was known for his antics, like making his younger sister lay on the floorboard of his 1961 Chevy convertible, “Maybelle,” so she wouldn’t be seen while Bob cruised town.

A member of historic Idewild Presbyterian Church in midtown Memphis, Bob believed that worshiping God and ministering to others did not stop at the church walls, a trait he carried throughout life. Bob was a 1961 graduate of East High School.

He attended Florida Southern College, but considered his academic attendance optional at the time. Eventually, Bob transferred to the University of Memphis, where he earned a bachelor’s degree in engineering.

His time at Florida Southern, however, was not a total loss, as it was there that he met the love of his life, Laurel (Gil) Gilmour of Yonkers, New York. They married on June 5, 1965.

The couple first made Memphis their home, but rural life called to Bob, and the couple eventually settled on family land outside of Cabot, Arkansas. Bob taught at Cabot High School, but then became a dairy farmer for the next 20 years.

Bob was deeply engaged in the Cabot community. He was a youth coach and assisted as a 4-H leader, a Sunday School teacher and UMY volunteer, played in his church softball and basketball leagues, and excelled as both a trumpet player in the Cabot Alumni Band and tennis athlete. Bob served on the Cabot School Board from 1981 to 1986, including as its president in 1986. He was a member of Cabot United Methodist Church.

Bob eventually transitioned from farming to construction, specializing in custom-built homes and subdivision development. He was a charter member of the Cabot Homebuilders Association.

Listing ones’ careers and activities, however, never explains who a person truly was: Always the life of the party, Bob led the Chicken Dance at any opportunity and did not know a stranger. With sparkling blue eyes and a love for dogs, Bob never took life too seriously and was always quick with a witty comeback. His ministry was often behind the scenes, quietly mowing yards for those in need, protecting an empty house during a loved ones’ funeral, or ignoring what others owed him when they needed financial help.

He is preceded in death by his parents, his sister Carolyn, and nieces Katie and Ellie Gribble. Bob is survived by his sisters, Mary “Brownie” (John) Gibbs of Olive Branch, Mississippi, and Rebecca “Becky” (David) Gribble of Germantown, Tennessee; his wife of 55 years, Laurel; his son, Ray (Holli) of Bentonville, and daughter Molly (Randy) Phillips of Franklin, North Carolina; his four grandchildren, Lauren and Andrew Mayer and Kate and Eli Phillips; and a host of nieces and nephews.

Contributions in Bob’s memory are greatly appreciated and may be made to the Bob Mayer Scholarship Fund through the Cabot Scholarship Foundation, 602 North Lincoln, Cabot, AR 72023.

A celebration of Bob’s life will be held at 10 a.m. Saturday, September 26, at Eight Point Lodge, 1546 Clay Hill Road in Lonoke, Arkansas, with a drive-through visitation there on Friday, September 25, from 5-7 p.m. Due to the risk of exposure to COVID-19 and with family members who are immuno-compromised, the family requests everyone attending the visitation and service wear face coverings.