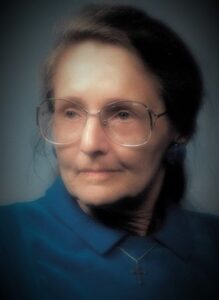 Barbara Jean Hodges Burlin, 85, of Jacksonville, passed peacefully at her home on October 3, 2020.  She was born on October 22, 1934 in Tulsa, Oklahoma to Yewell Joseph and Bertha Helen (Coatney) Hodges.

She interrupted her pursuit of a nursing degree when she met and married her Air Force man, Wallace Albert Burlin.  They were blessed with four wonderful children. She was a proud military wife, having lived in the Philippines and six different states.  She proudly worked part-time for the Red Cross, assisting the military service men and women with emergency leave. Barbara returned to complete her Associates in Nursing and worked for Rebsamen Memorial Hospital in Jacksonville, Arkansas and the Veterans Hospital in North Little Rock, Arkansas. She had an artist’s eye and heart and enjoyed supporting the local artists.

She is preceded in death by her sister Dorothy Jane Hodges; her brother Francis Leroy Hodges and her granddaughter Elizabeth Marksteiner.

Memorials may be made in her honor to American Red Cross Disaster Services.

Memorial mass will be Friday, October 9, 2020 at 8:15 am at Immaculate Conception Catholic Church, 7000 John F. Kennedy Blvd, North Little Rock, Arkansas. Due to Covid considerations, Vistation will be Thursday Oct 8 from 5-7 at the outdoor pavilion (behind church) of St. Jude the Apostle Catholic Church,  2403 MacArthur Drive, Jacksonville, AR.

Burial will be in Tulsa, Oklahoma at a later date.