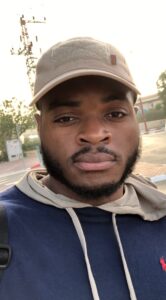 Courtland Matthew McDonald, age 24, affectionately known as “Court/Matthew,” was born on September 2, 1996, to Larry and Bonnie McDonald in Little Rock, AR. Court Matthew transitioned from this life on September 20, 2020, with his beloved wife and IUIC brothers and sisters trying to aid him at Lake DeGray. He is proceeded in death by his grandfather’s Kenneth H. Byrd and Earl T. Ruffin.

Courtland Matthew was raised and attended Jacksonville Public schools where he participated in the band and sports before graduating from Jacksonville High School in 2015. Court/ Matthew always demonstrated a sense of knowledge and wisdom. His gift of discernment was often acknowledged by his family, especially his niece Audrey, as he often cautioned her to “be careful” during their daily backyard adventures “to infinity and beyond!”  Being confident of this very thing, that he which hath begun a good work in you will perform it until the day of Jesus Christ” (Philippians 1:6, KJV). This verse instilled in him from his mother Bonnie, truly demonstrated what the Most High has completed with him in 24 years!

Friends were important to Courtland Matthew as he felt, “Greater love hath no man than this, that a man lay down his life for his friends” John 15:13 (KJV). He had a number of friends that he valued and held dearly. Each of them played a pivotal role in his life and he never held back to express to each of them how he appreciated their friendship and loyalty. His favorite places where he was often found with them was at the batting cages or in the gym!

“If anyone should ever write my life story…. Jesus is the best thing that ever happened to me!” Court Matthew spiritual beliefs began at a young age. He accepted Christ as his Savior and was baptized May 2018. Court was a devout believer of the truth in the Israelites Law. He was a diligent vessel being used by the Most High to witness, encourage, and educate others of what our Father and Savior Jesus Christ has commanded all of His children to uphold.

Court had a strong bond and loved being with his family during their numerous experiences. From the time he became a big brother he was policing the house to protect the youngest sis, Candise! This responsibility carried over to his nieces and nephews. The question they always asked, “Where’s Uncle Court!” It wasn’t anything to find him playing around with any one of the little ones, entertaining them by them taking silly pictures, talking with them about their interests, traveling to be with them, or taking them to his favorite place, the batting cages/gym!

Court Matthew met the love of his life Shamila Crawford, at Arkansas Baptist College through his favorite pastime, baseball. His eyes twinkled as he introduced her to the family for the first time. He and Shai were married on September 16, 2019. Together they have a child due in 2021. Shai will forever hold many moments of laughter, hopes and dreams, especially their walk of Faith and Truth. Court Matthew’s favorite scriptures shared with his wife are: “Trust in the Lord with all thine heart; and lean not unto thine own understanding. In all thy ways acknowledge him, and he shall direct thy paths” (Proverbs 3:5-6, KJV).

“Not that I speak in respect of want: for I have learned, in whatsoever state I am, therewith to be content. I know both how to be abased, and I know how to abound: everywhere and in all things I am instructed both to be full and to be hungry, both to abound and to suffer need. I can do all things through Christ which strengtheneth me” (Philippians 4:11-13, KJV).

Other spiritual family members Geraldine Tell, Ella (JB)Moody, Dr. Renee’ Crater, Mr. Cameron Franklin, Coach Jerry, Carlotta, and Jeremy Wilson; Norman, Robin, and Javin Wakefield and the IUIC family were consistent influences that were noted as sharing words of knowledge until his demise. No words can express how Court Matthew will be missed as he leaves a legacy of love and servitude!

The seating is limited to 100 people due to COVID-19. The funeral service will be available online on ZOOM.