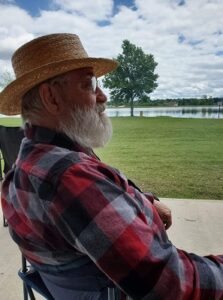 Dennis Edward Huff, born in Wichita, Kansas on December 27, 1942, passed away September 30, 2020 surrounded by loving family in the comfort of his daughter’s home in Conway, Arkansas. Dennis was preceded in death by his mother, ElDora, father and step-mother, Lennis and Polly, brother Danny, and his daughter, Elaine. Left to mourn his loss are his wife, Judith, two children, Dan and Alicia, five siblings, David, Bobby, Ginger, Ann, and Paul, four grandchildren, Morgan, Nathan, Mason, and Liam, and great-granddaughter, Meridian.

A jack of all trades, Dennis enjoyed such hobbies as sewing, sailing, carpentry, word games and riddles, calligraphy, coaching his children’s sports teams, and falling asleep watching golf. He also held a 210 average in bowling and belonged to several leagues in his younger years.

Dennis began his adulthood in the Navy as a Seaman Apprentice from 1960 to 1961. He worked jobs of all sorts before settling at Dassault Falcon Jet, eventually retiring as Director of Pricing after 33 years.

In his retirement, Mr. Huff mastered the Wii, prepared taxes, attended Seminary school, and cared for his several animals – 5 dogs and 12 chickens. He was a gentle, nurturing, charismatic, intelligent, and God loving man who will be greatly missed.

Memorial service will be held at Dennis’ church home, Friendship Baptist Church in Vilonia, Arkansas on Saturday, October 10, at 1 p.m.