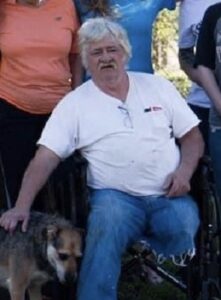 Steven Curtis Hinson, 60, of Mabelvale passed away on October 1, 2020, he was born in Little Rock, Arkansas on December 31, 1959 to Leo Hinson and Lea Ferrill Hinson.

He was a man of men and loved to prank and scare his siblings and family.  If you knew him you knew he had a generous heart but enjoyed aggravating everyone.  His fur-baby, “Bella” was his world, and she will miss him deeply.  He loved the outdoors going camping, fishing, and hunting but his passion was truck driving.

He is preceded in death by his father Leo Hinson and grandmother Nora Ferrill.

In lieu of flowers donations can be made to A Natural State Funeral Service, 2620 West Main Jacksonville, Arkansas.

Graveside visitation and service will be on Wednesday, October 7, 2020 at 10:00 AM at Pilgrims Rest Cemetery, North Rodney Parham, Little Rock, Arkansas.