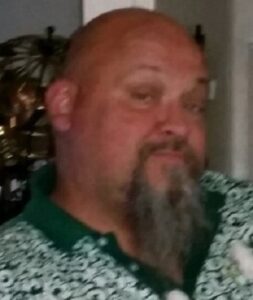 William “Bill” Henry Davenport, 57, a Navy Veteran and Baron passed away October 16, 2020, He is survived by his Loving Wife of 23 years Elizabeth of Sherwood, his brother Neil Davenport of Virginia, His Son Anthony Davenport of California, His nephew Richard Holloway of Sherwood, His Niece Jennifer Holloway and Husband Robert Van Hooser of Sherwood.  One grandson, three great Nieces and many other family and friends.

He was full of kindness, Infectious good humor, and a sheer zest for life.  He was an active member of the SCA and former Baron CuCullin the Bald of the Small Gray Bear.  He was a heavy fighter, a poet, and performed stage magic. He assisted in starting poet rooms around the central Arkansas area.  He was also a proud Navy Veteran with a colorful career of painting aircraft for the movie Top Gun and even painted the helmet for Tom Cruises character Maverick and performed Shore Patrol duties.  He will be greatly missed.