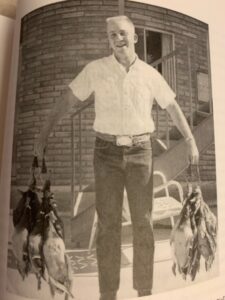 Jim graduated from Spring Branch High School in Houston, TX. When Jim was 13, he won the Jr. Division of the World Duck Calling Championship in Stuttgart, AR.

Jim worked with his father in Houston at PGA Golf Warehouse. Jim then became a professional hunting guide and led numerous friends, businessmen and celebrities on guided hunts at Paddlefoot Places & Jordan Farms in Texas. In later years, he moved to Arkansas and guided in Stuttgart. Jim was an avid hunter and fisherman. He is mentioned in the book “100 Years of Texas Waterfowls, the Decoys, Guides and Clubs” by R. K. Sawyer.

His other passion in life was painting. Several of his paintings hang in Hunting Clubs and private homes throughout Texas and Arkansas.

The family would like to thank Quapaw Nursing Center and Kindred Hospice for their loving care of Jim.

A private service will be held at a later date.