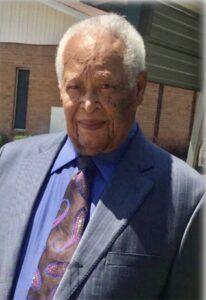 Theodore was born in Elliott, Arkansas on April 28, 1921, to the late Arthur Elliott and Saint Alma Kilgore Elliott. Dr. Elliott was a loving husband, father, grandfather, brother, uncle, neighbor, and friend. He always had a smile on his face and his positive spirit was infectious. Dr. Elliott brought a feeling of joy to whomever he was around. He was a devoted educator who spent many years teaching and inspiring others. Dr. Elliott received his bachelor’s degree from Arkansas Agricultural, Mechanical, and Normal College (Arkansas AM&N), his master’s degree from Tuskegee University, and his doctorate from University of Arkansas at Fayetteville. Dr. Elliott served as the principal of Lafayette School in Camden, later he became a professor at the University of Arkansas at Pine Bluff (formerly Arkansas AM&N), and in 1992, he retired as the Chairman of the Education Department at the University of Arkansas at Pine Bluff. Doc was a proud lifetime member of the Kappa Alpha Psi Fraternity. Also, in his role as a Master Gardener, he could grow just about anything and always loved giving advice. He was well known for his beautiful roses. Dr. Elliott was a selfless man of great faith. He was an honored and dedicated member of the Damascus Missionary Baptist Church of Pine Bluff where he served on many boards and taught Sunday school. Dr. Elliott enjoyed meeting new people and he could have an engaging conversation with anyone.

A memorial will be scheduled later to celebrate the life of Dr. Elliott. In lieu of flowers, the family humbly suggests memorial contributions be made to Damascus Missionary Baptist Church, 224 North Cypress St, Pine Bluff, AR, 71601, Dr. Theodore Elliott Educational Scholarship Fund. You can also donate online at: https://www.gofundme.com/f/dr-theodore-elliott-educational-scholarship