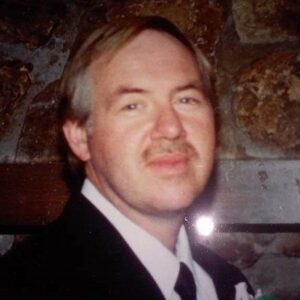 Gary Douglas Steckling, took his last journey home to be at peace with his late family on Monday, November 23, 2020. Born June 25th of 1957 in San Antonio at Brooks Army Hospital to the late Carl Frederick Steckling, Jr. of Milwaukee, WI and Gwendoline Joyce Steckling (Reeves) of Margate, England. Gary spent some of his early years in England with his brother, Calvin Steckling, before the family settled in Jacksonville, AR in 1963, where his mother still resides in his childhood home.

From a young age, he loved tinkering with model airplanes due to his father’s years of service in the Air Force. Speed and power were his passions with childhood friend John Privitera as they rode around in their muscle cars. At the age of fourteen, he started G&C Tackle Co. with his dad producing lures. Always a lover of the water, whether it be dropping down to the bottom while deep sea fishing, setting the hook on a largemouth bass, or fly fishing the White River with friend Doug Hastings. His love for fishing very easily could have been his profession, as he was on Bill Norman’s field staff fishing at the age of seventeen. His love of the outdoors did not stop with the water, an avid hunter, he harvested his biggest deer last year after hunting at the camp since 1964 with his father, mentor Joe Bailey and friend Elsworth Laird.

Formerly married to Vicki Sanders, they celebrated two children, Kenneth Steckling and Amanda Bland, who gave him the joy of six grandchildren total. His love then extended to his current wife of 30 years, Elizabeth LeeAnn Steckling (Phillips). They had an additional two sons, Ben Steckling and Jeremy Parr. Gary was a resident of Jacksonville for 50 years until he afforded his wife the opportunity to move back into her childhood home in Malvern, AR.

Gary started his career with the USPS Jacksonville branch at eighteen and medically retired with 30 years of service. His mail route was more than a job to him and he would always go out of his way to ensure even the simplest of tasks, like making sure his patrons had stamps.

After retirement, he went into ushering baseball games during the summer for 8 years at Dickey Stephen’s Park. This was just one example of his love of sports, as he spent many days watching his daughter play softball or coaching his middle son with his inspirations Rory Norseworthy and AL “Big O” Owens. His tinkering with model planes never left his imagination as it too progressed into building train models with his youngest son. A collector of antique coins and silver, his fondness stemmed from his Father-in-law, the late Bennie Phillips, gifting him his first Peace Dollars.

Peace and love are what Gary lived for every day and his heart was always so open! His family never quit growing and was his pride! He will always be remembered for that smile! We love you son, husband, dad, and friend, always and forever, bunches and bunches!!!