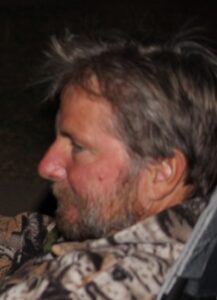 Grant Edward Youngblood, 63, our beloved son, brother, uncle, great uncle, and friend, passed away on Tuesday, November 3, after a long and rather amazing fight with cancer.

He now rests with his and our hope and faith to live forever with the Lord Jesus Christ whom he loved in his own fashion.

Born March 24, 1957 in Morrilton, Grant and his numerous brothers and sisters were raised by his parents in a modest rural homestead where Grant began to develop a lifelong love of hunting, fishing, and hard work. Entreprenurial in spirit, proud, and hands-on, Grant truly enjoyed his various occupations over the years as a mechanic, owner of a diesel and heavy equipment repair business, and later in life, having success at cattle and land acquisition, and owning and operating an excavating, demolition, and grading company.

Grant possessed a true affinity for hard workers like himself regardless of their social standing, occupation, or ethnicity. Still, he always had time to lend a hand to his family and friends and help with their projects, car repairs, and other concerns, and seemed to always have a little extra “deer sausage” to give away during, (and sometimes between), hunting seasons.

He loved people, loved to hear and tell stories, and loved to ask questions and exchange viewpoints, having an exceptional curiousity about almost everything. When puzzled or stumped about a particular notion or idea, Grant wanted to think about it and talk about it, usually at the same time, as he sorted it all out. He was most content out-of-doors. He loved the San Juan Mountains of Colorado, was an avid enthusiast of anything fast having an internal combustion engine including race cars and motorcycles, but was happiest on his own land in Scott and in the company of friends.

Here, he chose to fight his last battle against cancer, relying in the end on his remarkable family to help him live out his last days and take his last breath at home.

A memorial service celebrating Grant’s life will be held Saturday, November 21 at A Natural State Funeral Service 2620 West Main Street in Jacksonville at 3:00, at.

You can view the tribute video by clicking the link below:
https://www.tributeslides.com/tributes/show/4K78RQ5576SBRBPJ