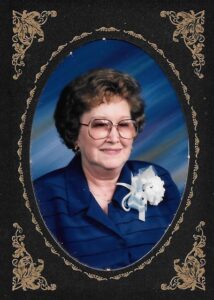 Ida Louise Whiteside shed the shackles of this Earthly existence on October 30, 2020 at the age of 90 years young, for the promise of a better place.  Born April 17, 1930 in Dumas, Mississippi to the late William M and Vancie Lee (Cappleman) Stricklin, she was a farmer’s daughter.  As the eldest of six children, she mastered the kitchen and helped to raise her younger siblings. Having moved to Memphis after graduating high school, she attended Draughon’s Business College.  Upon completion at Draughon’s, she was hired by Phoenix Rubber Company as a bookkeeper.

She married Johnnie W. Whiteside on April 2, 1950 in Blue Mountain, Mississippi.  They set up housekeeping in Memphis, Tennessee for 18 months.  Then lived in Warrensburg, Missouri, for 2 months before moving to Columbus, Ohio for 9 months before moving back to Warrensburg, Missouri for 9 months.  Onward to Warner Robins, Georgia for 9 months, Louise went back to Memphis, Tennessee for 18 months while Johnnie was stationed in France, upon return from overseas, then to Spokane, Washington. Dad left the military and they went back to Memphis, Tennessee, welcoming Sandra Lynn on April 30, 1956.  He was recalled to the Air Force, and on they go again, to Blytheville, Arkansas welcoming Glenda Leigh on December 22, 1958, to Little Rock AFB in 1960.  Mom and the girls went to Ripley, Mississippi in 1965 while Dad went to Vietnam for one year, forward to Enid, Oklahoma (Vance AFB), back to Little Rock AFB in 1971.  Following the military “wife” style, they retired from LRAFB in 1976 and have called Jacksonville home since.

She was a stay-at-home mother throughout her girls’ childhoods staying busy sewing all their clothes, cooking, cleaning, socializing through the NCO Wives Club, and was an active teacher in Sunday School/VBS at military bases.  She worked at Jacksonville Paint and Wallpaper as a bookkeeper during the mid to late ‘70’s, finally retiring as a teaching paraprofessional in Adult Education from Little Rock School District in 1993.

Preceded in death by her parents, brothers, Billy Joe, James Robert, John Edward; sister Henrietta; in-law family and grandson Timothy R. Sieger is in Heaven, ready to greet her along with numerous friends.

In light of the current health concerns, Ida Louise’s family thanks you for your thoughts and prayers if you are not able to attend the service. Please be aware, as per Arkansas directives, attendance will be regulated in accordance to Arkansas guidelines, all guests in attendance will be required wear masks/facial coverings and social distancing guidelines will be in place.

Visitation will be Friday, November 6, 2020 at 9:30 AM with funeral service beginning at 10:30 AM at A Natural State Funeral Service, 2620 West Main Street, Jacksonville, Arkansas. Interment will be at 12:00 PM at Arkansas State Veterans Cemetery, 1501 West Maryland, North Little Rock, Arkansas.