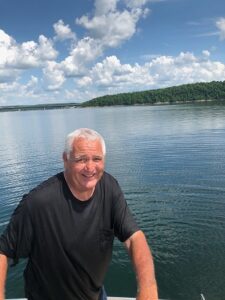 Michael James Kilpatrick, 62, of Norfork Arkansas passed away November 19, 2020 surrounded by his loving wife and kids.  He was born on October 18,1958 in Joliet, Illinois to Robert and Yvonne Kilpatrick (Scaman).  Mike was preceded in death by his parents.

Though Mike was born in Illinois and raised in Morris, he considered Texas his home.  Mike worked for Mid America of Texas for over 25 years.  He moved to Norfork Arkansas in January 2019.  He loved to trout fish on the White River and could be found most days putting his boat in at Red’s Landing. Every morning Mike walked with Bristol, his four-legged best friend.  All she had to see was him get up from his chair and go to get his shoes, and she would get so excited, cry and “talk” to him.  He also loved to play golf and could fix or build most anything.  Everything he made was made to withstand the test of time.  He loved fast cars and was known to have a lead foot like his mother.  He taught his daughter and two granddaughters how to “pitch it sideways”. Mike taught Jerry Michael how to split wood and shared his love of fishing with him.