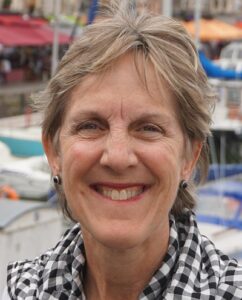 Catherine Anne Hagemeier, 60, died peacefully at her home in Little Rock on December 12,2020 surrounded by her husband, Mark, and two daughters, Katie and Annie.  Cathy was diagnosed with leptomeningeal cancer on February 13, 2020 at UAMS, and she lived fully and well both before and after her diagnosis.

Cathy was born and reared in Council Bluffs, Iowa.  After graduating from Abraham Lincoln High School in 1978, Cathy attended the University of Northern Iowa in Cedar Falls on a tennis scholarship.  She graduated in 1982 with a degree in biology, and she returned to teach high school in Council Bluffs for the next four years.  A serendipitous reduction in force at the local schools propelled Cathy into a life of adventure away from Iowa.  In the fall of 1986, she took a semester-long Outward Bound course, and the Hurricane Island Outward Bound School subsequently hired her as an instructor.  Cathy spent the next four years paddling rivers and hiking in the woods of Florida, New Hampshire, Vermont, and Maine with youth and adults.  In the fall of 1988, Cathy met Mark, another Outward Bound instructor (and Arkansan), in Scottsmoor, Florida, and her chances of a return to Iowa diminished greatly.

After a frigid winter in New Hampshire in 1990-91, Cathy and Mark moved to Fayetteville, Arkansas.  Cathy worked as a child welfare worker at DHS and completed a Master’s Degree in Secondary Educational Administration while Mark completed a law degree.  Cathy always fondly remembered the three years she spent at the University of Arkansas and her transformation from a Hawkeye to a Razorback.  In 1994, Cathy and Mark moved to Little Rock, and she began working for what is now UALR’s MidSouth Training Academy as a trainer of the Arkansas Department of Human Services’ social workers, managers, and foster parents.  But for a brief hiatus for rearing her daughters, Cathy worked at MidSouth from 1994 until early 2020.  Cathy loved her job at MidSouth, and she touched the lives of so many people while working there.

Cathy was an active member of Second Presbyterian Church in Little Rock.  Over the past 22 years, Cathy served as a Sunday school teacher, confirmation mentor, Deacon, and Elder.  Cathy was also an active sister in PEO Chapter BV of Little Rock.  Although Cathy served as the chapter’s president, she was best known for her yearly margarita party held each Cinco de Mayo.  Cathy was a truly sweet and gentle soul, and she enjoyed hiking, reading, gardening, playing pitch, and laughing with friends.

Cathy is survived by her husband of nearly 31 years, Mark, and their two daughters, Katie and Annie, the greatest joys of her life.  Cathy is also survived by her parents, Bud and Anne Crowl; her brother, Matthew Crowl (Holly); and her sister, Amy Crowl-Kinney (Kurt).  Numerous nieces, nephews, other family members, and friends also survive her.

Mark, Katie, and Annie would like to thank the doctors, nurses, and staff at UAMS for the initial care they rendered to Cathy both before and after her diagnosis.  They would also like to thank the nurses, social workers, and staff of Arkansas Hospice for the unbelievable support they extended to Cathy since March.  Additionally, they would like to thank family and friends everywhere who have supported them through this phase of Cathy’s and their lives.  Your love and presence have literally been a life sustaining force these past ten months.   A special thank you to Barbara Faulkner who has cared for Cathy at home since August.  And finally, Mark would like to thank his phenomenal colleagues at UAMS and the University of Arkansas System for their care and concern this past year.