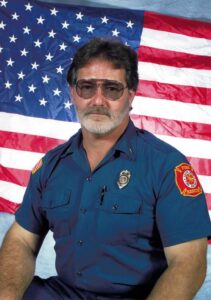 Gene was a 1979 Graduate of Jacksonville High School. He was a Captain at the South Bend Fire Department where he was an active volunteer since 1995.  He worked for Leader Newspapers as their shipping and receiving manager since 2003. He was an active volunteer for Arkansas Ducks Unlimited.  Gene enjoyed riding motorcycle’s, camping, fishing and tinkering on projects. He enjoyed building radio controlled boats and planes. Gene was a founding and former member of Fire and Iron Station 90 motorcycle club.

Gene was a man of integrity, and was always there to help anyone in need. He could fix anything and was a true friend.  He was a social butterfly and never met a stranger.

He is survived by his daughter Melissa Ann Johnson, life-long partner and care taker Deresa Holler, three sisters; Gloria Burnett of Maryland, Deborah Lee-Choate of Cabot, Barbara Perkins of Jasper and all current and former members of the South Bend Fire Department.

Gene will be missed by all those whose lives he touched. “To live in the hearts we leave behind is not to die.”- Thomas Campbell

You can view the tribute video by clicking the link below:
https://www.tributeslides.com/tributes/show/PF7JWB6NHQ95BNCB