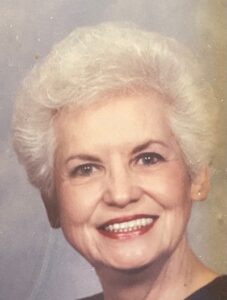 She spent her working years first as a military wife and mother, then closing loans for various mortgage companies, and finally as an avid shopper on a never-ending hunt for bargains.  She brought enormous light, joy and if she could, home cooked food to all that she met.  She will be loved, missed and remembered always for her loving heart, generous spirit, and mischievous sense of humor.

In remembrance of Wilma Ruth Owen, donations may be made to a charity of your choice.