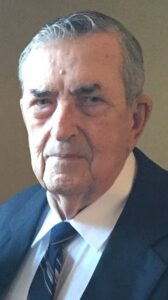 David Fanning was raised on a farm in the rugged and beautiful mountains of Bland County, Virginia. He often shared stories with his children and grandchildren of life in the mountains, where he loved going fishing and playing baseball. He graduated from Bland High School in 1955, and then served his country honorably in the United States Air Force for over 22 years, retiring as a Master Sergeant in 1978. During his military career, he traveled throughout the United States and enjoyed serving overseas in Iceland, Spain, and Greece. Following his time in the United States Air Force, he attended Pikes Peak Community College and worked for Parts Warehouse, Inc. until retirement. In retirement, he often traveled with his wife and spent time trout fishing. He will be remembered for the great love he had for his family and the kindness he showed to others.

In light of the current health concerns, David’s family thanks you for your thoughts and prayers if you are not able to attend the service. Please be aware, as per Arkansas directives, attendance will be regulated in accordance to Arkansas guidelines, all guests in attendance will be required to wear masks/facial coverings and social distancing guidelines will be in place.

“To be a Virginian either by Birth, Marriage, Adoption or even on one’s Mother’s side is an introduction to any state in the Union, a Passport to any Foreign Country and a Benediction from Above.” -Anonymous