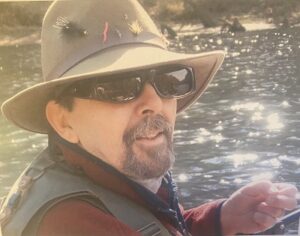 Fleming Stockton, of Little Rock, gave it a rest after 76 years in this life. He once said that he believed he was a warrior in a past life, so he took it easy in this one. Which we don’t all agree that he took it that “easy.”

Fleming was a man of many words and would share them with anyone who would listen- in person or in print. He was the epitome of a walking history book. A creative soul who appreciated all art, music and literature. An avid movie buff, who would recommend a movie and proceed to tell you the entire plot.

He loved to travel the country; known to escape to a cool trout stream with his hand tied flies, fly rod and waders in tow.  Wherever he went, he never met a stranger. He had a certain “je ne se quoi” that would help him find a connection with anyone.

Many may know him as the man behind the meatloaf and famous yeast rolls. He and his wife, Barbara, were the owners of the former Downtown Little Rock staple, Your Mama’s Good Food. If you were a customer, you probably remember him best as a friend, or the one you could hear yelling from the kitchen. His passion for good food did not start or stop with his restaurant. He was often made fun of by his family for being picky and for taking so long to finish a meal.

Fleming, also lovingly known by his children as “Papa” and as “Butch” in his adolescence, is survived by his wife, Barbara Stockton; daughter, Aimee Stockton; son, Alex Stockton; mother, Billye Stockton; brothers, Mark (Karen) and Stephen Stockton; his brother and sister in laws, nieces and nephews, granddaughter, Rylan Oguschewitz and grand-dogs, Louie and Oakley Stockton.

We believe that Fleming has now been reunited with his loving companions; his dog, Buddy and his grand-dog, Jackson.

In remembrance of such a memorable man, the family asks that you consider donations to the National Park Foundation, nationalparks.org.