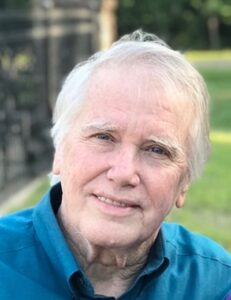 Lamar Scurlock James, born February 3rd, 1947, parted this earth to be with Jesus on January 10th, 2021. He was born to Arthur Sinclair James and Fay Scurlock in Malvern.

Lamar retired from the University of Arkansas Cooperative Extension Service and previously the Arkansas Gazette. He graduated from Ouachita Baptist University with a double major in Political Science and Journalism. He was a notable Arkansas Gazette reporter and columnist for many years.

Lamar was preceded in death by his father, mother, and an infant son, Joshua. Lamar is survived by his wife of 35 years, Debbie James, of Jacksonville. He is also survived by his siblings: Herbert and Diane James, Carolyn Cooper, and Janet Tugwell all of Malvern; four children: Amanda (Mandi) McDermott of Haskell, Jeff and Mary Ann Reynolds of Garner, NC, Shawn and Amy Blair of Ward, Shannon and Laura Saunders of Melissa, TX; ten grandchildren and a host of nieces and nephews who Lamar adored.

Lamar was a self-proclaimed classic “nerd” who was always the jokester and comedian of any group. He loved music, photography (where he won an international award), gadgets, the five fingers of death, sweet tea, peanuts, and anything sci-fi. He had a ginormous heart for animals and would always carry extra pet food under the seat of his car in case he came across a stray. It was a family tradition for Lamar to jump in the freezing swimming pool every Thanksgiving! If you are reading this, there is a big chance that he took your picture at some point. To quote Lamar, “Live Long and Prosper!”

Lamar’s family is requesting in lieu of flowers, all donations be made to https://gofund.me/e0fe1fe5 to help the family with funeral expenses.