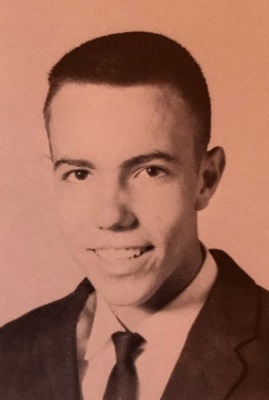 Larry James Morrow of Mabelvale, Arkansas passed to his eternal rest on January 25, 2021 at his home and was welcomed on “that other shore” by those loved ones who preceded him there.  Larry was born July 13, 1946 to James Wilfred and Betty Frances Wright Morrow in Morrilton, Arkansas, the oldest of three sons.

He was a 1964 grad of Mabelvale High School, received his Bachelor of Science degree from the University of Arkansas at Little Rock, and spent the majority of his career in the electrical/mechanical trades.  Larry loved the serenity of watching the wildlife that visited his cabin on his beloved Tucker Mountain, and they felt the peace of a sanctuary, knowing they were out of harm’s way when on his property.  Under his brother Dennis’ “tutelage” he was well into planning his second spring garden — destined to be bigger and better than the one the year before — and proudly accepted the well-earned monikers “Mater Master” and “Pickle Pro” as a result of the outstanding success of his first canning venture. (As an “ex-officio” member of his wife’s college football pool, he also delighted in beating her with his rapid-fire picks, while she had spent hours laboring over hers!)

Larry is survived by his wife of 54 years, Janis Morehart Morrow; a daughter of whom he was extremely proud, Lara Catherine Morrow of Portland, Oregon; his parents — James and Betty Morrow of Tucker Mountain (Solgohachia, Arkansas); two brothers — Dennis and his wife Sarah of Arkadelphia, Arkansas and Kevin and his wife Penny of Center Ridge, Arkansas; a brother-in-law, Richard (Dick) Morehart and his wife Virginia of Fairhope, Alabama; and a dear, lifelong friend, Don Van Bibber of Tucker Mountain.

There will be no formal service as Larry’s desire was to be cremated and his ashes spread at a future date on his beloved Tucker Mountain with family and close friends in attendance. The family welcomes memorial messages.