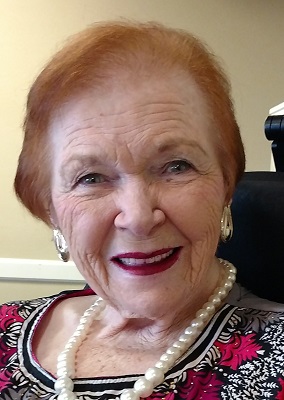 Mattie Ann (Trissy) Thornton, 85, of Heber Springs, Arkansas, passed away on January 19, 2021 at White River Medical Center in Batesville. She was a victim of COVID-19. She was born in Hope on August 23, 1935 to the late Tony Thomas Rowe and Myrtle Symoura Rowe. She lived most of her life in Arkansas. Prior to Heber Springs, she lived in Fairfield Bay for five years.

Trissy was a loving wife, mother, and nana. In addition to her being a homemaker, she worked as a secretary at Benton High School and as the secretary for the former Lieutenant Governor Joe Purcell. Her greatest joy in her professional life, however, was being a GED Examiner for the State of Arkansas. Besides spending time with her family and friends, she enjoyed crafting, flowers, and hummingbirds.

She is preceded in death by her parents, her loving husband of 50 years, Bobby Lee Thornton, and her brother, Thomas Ray Rowe.

She leaves behind her sister, Reba Rowe Ray of Nashville; her daughters, Dealia Ann (Dee) Yancey (Ted Hood, Jr.) of Fairfield Bay, and Le Byers (Jerry Davidson) of Conway. She was lovingly known as Nana to her three beautiful granddaughters: Sarah Yancey of Knoxville, TN, Amber Leigh Copeland of Conway, and Alei Rice (Josh) of Maumelle. Her great-grandson, Alexander Lamb, was the apple of her eye.

Trissy will be buried with her late husband at the Arkansas State Veterans Cemetery in North Little Rock. A memorial service will be planned at a later date. The family requests that in lieu of flowers, a donation be made to the Fairfield Bay Library (369 Dave Creek Parkway, Fairfield Bay, AR 72088).