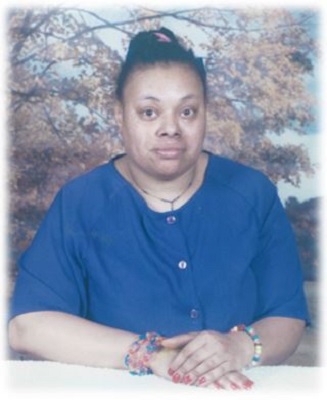 The Home Going of:

Zelda Lee Jones was born on a sunny day in Little Rock, Arkansas at UAMS on August 8, 1956 to the proud parents of Mr. James Jones and Sam Lee Jones. Her mother, Sammie Lee Jones and grandmother Ticey Bruce Peters preceded her in death. Zelda was an only child and grandchild. She was surrounded with lots of love and care by her mother and especially her grandmother Ticey Bruce Peters whom she lovingly called “Momma”. She was loved and nurtured by her many great aunts, uncles, cousins, neighbors, and friends.

She started school at age 5 years (she attended a special school for children with handicapped conditions). Her time in school was short-lived due to having ADHD and other cognitive short comings. Due to her disrupting in class- her grandmother withdrew her from school and homeschooled her. She made reasonable progress because she was taught to read (very little), write very little, and no real arithmetic to my knowledge.

Note: Her grandmother taught her as many life-skills there in their home. She attended Shiloh Baptist Church (off Broadway- North Little Rock, AR). She later was baptized at a Pentecostal Church by Bishop District LR Williams. She attended parades, library, walked downtown to shop with her “Momma”, and rode the bus. She learned to wash dishes, sweep, and attended to her basic hygiene needs.

At their home on 17th Street in North Little Rock (parallel to the Eastgate Projects), she had a comfortable home with her own room. She and her grandmother sat in the kitchen, living room, or even on their front porch. There they had a dog which she loved dearly.

They often came to our home 2 1/3 blocks away (16th Street) or they visited her great Aunt Lula Mae Bruce Matthews who lived right across the street from our house on 16th Street. In addition, she visited her great-great-grandfather, 90 year Calma Dane Bruce, 4 blocks down 16th Street. There her great-Aunt Odessa Bruce Watson and her great-Uncle James Bruce/Isaiah Watson lived there also. Across the street from them was a 2nd cousin who owned a dry-cleaning business who was “Columbus McCall” and wife Autra Bea McCall. So, as you can see Zelda had a “true village” from which to glean love, fun, playing, joy of loving relatives, and lots of fellowship and good food as well as discipline. The village children always showed love to her for they knew she had social skill deficits.

Zelda had sometime with her mother but at about 1 years old, her father, James Jones (a college student) moved back to Blythesville and the parents eventually divorced. (Never to hear much him of family except for the few times her cousin, Gladys McCraw Wilson, drove Zelda and her grandmother to Blythesville where they met Zelda’s grandparents and other relatives.

Unfortunately, 40+ years passed and up to now no words of her father (James Jones) whereabouts.

She lived 95% of her life with her grandmother (Ticey Bruce Peters) until on December 3, 1984 when her grandmother was brutal attacked. From there at age 23 she lived on 13th Street with her great-Aunt and cousins (Lovater Bruce McCraw/Gladys McCraw Wilson) but for only 8-9months. Then she was assigned to a facility in West Helena, AR that was for handicapped adults. There she experienced some unfortunate abuse.

Fortunately, Jean’s nursing home in College Station in LR, AR (owner: Mrs. Eunice Reed) had a special cabin built especially for young-handicapped adults which was operated 24 hours with supervision. There she blossomed. Again, tragic struck- a tornado devastated the entire facility and she was moved to Brookside Nursing Home of Rodney Parham- there she spend 18years with special love and care from RN Martha Stebbins whom she lovingly called “Momma”.

Following her release from there, she was at Barnes-Lonoke, then Arkadelphia facility, and back to Barnes. So, you see, Zelda earned her right to be honored for through her journey (including her severe ADHD, etc.) she learned to cope with life and others with the help of the Almighty God!

Zelda loved beautiful clothes and red finger nail polish and jewelry and good food for she had that and lots and lots of love.

Other special cousins in her life were Gladys McCraw-Wilson and her husband James Wilson.

Now Zelda, “You have a New Home up in Glory and it’s yours to keep!”

Loving written by cousin who was there for many years,

The family of Zelda Lee Jones would like to thank you for your love and support of her throughout her lifetime.