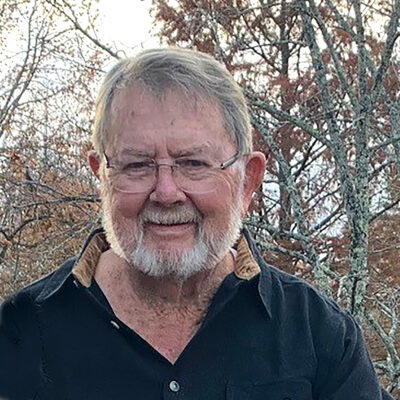 Arthur Garfield McGee Jr. was born in Forrest City, Arkansas where his father, Arthur Garfield McGee Sr. and mother, Ollie Melinda Dotson McGee worked as tenant farmers.  He was the youngest of four children.  It was during these formative years that A.G. developed his love for the outdoors, camping and jeeping in the woods, and a love of the land.

Eight months after A.G.’s birth, his father developed pneumonia and passed away.  His mother lived to see all four children grow up and leave home and start families of their own in Forrest City.  Carl Kew Hancock, the oldest, joined the military and later worked for General Dynamics in San Diego, CA.  Edith stayed in Forrest City working for First National Bank and later helping her husband run Dodson Farms growing and selling sweet potatoes.  Helen also stayed in Forrest City, married a Baptist minister/County Tax Assessor and worked in the Tax Assessors’ office.

A.G. and Nan met at a grocery store in Brinkley, Arkansas where A.G. was delivering Hart’s Bread.  Nan was an employee whose job description included monitoring all incoming orders.  Much to A.G.’s dismay, Nan took her job seriously and meticulously counted all inventory.  They managed somehow to move beyond this little bump in the road and married in Brinkley, Arkansas in 1953.

A.G. and Nan have a family of three daughters and two sons, Connie, Bonnie, Glenda, Kenny and Lynn, Son-in-law Thomas, daughters-in-law Kathy and Carol, along with six grandchildren and nine great grandchildren.  He dearly loved his family.

After retiring from management, A.G.’s passion for farming came to fruition in 2004, when he and Nan bought an almost 60 acre cattle ranch in the foothills of the Ozark Mountains in Clinton, Arkansas.  They dedicated their “retirement” years to their property, transforming it into a healthy, beautiful farm and forest park.  It is here that he wanted his ashes buried.

A.G. loved the Lord Jesus.  He served as deacon, Sunday School Superintendent, teacher, and song leader in churches he attended. This very hour he is in the presence of his Savior at home in heaven.  He is loved and will be missed terribly.

A Celebration of Life gathering will be held on Saturday, September 25, 2021 in Clinton, Arkansas.