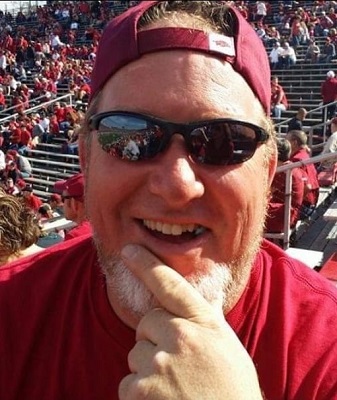 Jeffrey Scott Burrington, age 53, of Ward, Arkansas passed away on July 11, 2021. He was born on November 19, 1967 in Omaha, Nebraska to Gordon Burrington and RoseAnn Cook.

Jeff was, among so many other things, the life of the party. His laugh, starting from his belly then moving up and breaking into a big beaming, open-mouthed smile would soon infect the whole room. If you were ever sad around him, you wouldn’t be for long.

He’d start dancing and grooving with a drink in hand, then pop over to play a couple rounds of cornhole, and that’s where you wanted to be. More than anything, he just loved being with those he loved, dear friends and family.
No one loved harder or worked harder, and he prided himself on being the kind of person that could work all day with you out in the field, and then give you the shirt off his back if you needed it at the end of the day.

He will be deeply, deeply missed by his family leaving behind his mother, RoseAnn Cook and father, Gordon Burrington, his son Taylor Burrington and his wife Kat, his sister Lisa Armstrong and her husband Ron, nephews Ryan and Shane, and grandchildren who knew him affectionately as Papa Jeff and so many special people who were like family like Saundra, Melody, and so many others.  He also leaves behind his wonderful friends at Jay’s Sandbar, but we all know that he’s out there riding on a Harley, the sun shining, wind on his face, and nothing in front of him but a beautiful, stretch of road.