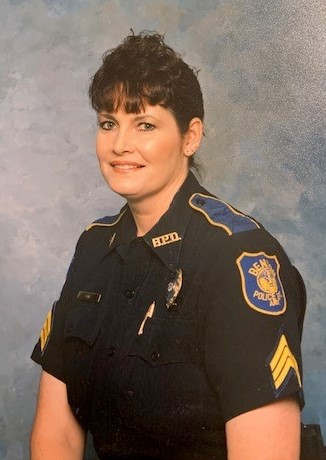 We regretfully announce the passing of Patricia “Pat” Coleen Long, 63, of Benton Arkansas.  She passed away on August 5, 2021.

Pat was born on July 27, 1958 to Joan and Charles Long in Riverside California.  She was the third of nine siblings. Pat graduated from Jacksonville High school in 1976.  She enlisted in the United States Marine Corps right out of high school and served for three years.  She was honorably discharged in 1979 after earning two Meritorious Masts, a Good Conduct Medal and the Rifle Marksman Badge. After fulfilling her service contract she started the career she always wanted as a police officer in Benton Arkansas.  She served the city from June 1981 to August 1995 when she retired and then stayed to live.

While on the police force she continued to serve her country in the Little Rock Army National Guard.  She attended the University of Arkansas at Little Rock and completed a degree in Criminal Justice, making the Chancellors List.

After a life of faithful service, she will be laid to rest with military honors at the Arkansas State Veterans Cemetery.  A graveside memorial service will be held at 9:00 AM Friday, August 20, 2021.