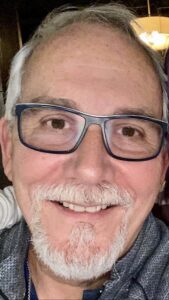 David Allan Martindale met his savior on October 20, 2021. He was born in Athens, GA on January 29, 1956 to the late Don and Johnnie Martindale.  He graduated from William Byrd High School in Vinton, VA where he earned the distinction of Eagle Scout and formed a lifelong love for baseball.

David earned his Bachelor of Science degree from Virginia Tech, where he studied Architecture and Business Management. After college, he worked in several fields including draftsman, town manager, volunteer firefighter, and insurance salesman.  He moved to Arkansas to be closer to family and began working in medical practice management, later founding his own company in the same field.

After David moved to Little Rock, he met the love of his life and his best friend, Ginia. They were married on September 30, 2001 and celebrated their 20th anniversary this year.  They held hands as they faced the world together and loved each other deeply. In addition to his Ginia, David loved Jesus, his family, New Life Church, blues, jazz, and a good cigar.

David was a beloved fixture of New Life Church Greater Little Rock. He served with love, grace, vision and energy.  His contagious laugh and encouraging spirit welcomed everyone who walked in the doors. He proudly graduated from New Life Church School of Ministry in 2020 and was invited to serve as a deacon at NLC GLR. David was influential in growing the men’s ministry and loved mentoring the next generation. David’s heart to serve was expressed in everything he did, from crawfish boils to Man Camp. David truly loved and served people like Jesus.

A celebration of David’s life will take place at New Life Church Greater Little Rock on Monday, October 25, 2021 at 11:00 am