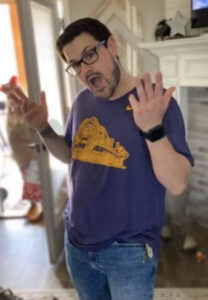 Jacob Davis Holcomb was born in Gulfport, Mississippi, on July 26, 1988. He passed away at his home in Monroe, LA on Thursday December 9th, 2021.

To know Jacob was to love him. He was a very outgoing and likable guy. He never met a stranger. His famous words were let me get that lil cuz. He had a huge heart and was always willing to help anyway he could. He loved watching his Mississippi State Bulldogs and the Saints. He was known for his constant movie quotes such as “Mom the meatloaf now.” His biggest accomplishments were his children. Landon Charles Holcomb, Evie Mae Holcomb, and soon to be Finn Richard Holcomb.

Our family wants to thank everyone for the prayers, messages, and calls. Our families pray is for Jacob’s story to live on and hope it saves a life. If anyone is struggling with addiction there is still hope and it is not too late to ask for help.

Arrangements are under the trusted direction of A Natural State Funeral Service, 2620 West Main Street, Jacksonville, Arkansas, 72076. 501-982-3400. Online guestbook is available at www.anaturalstatefuneralservice.com