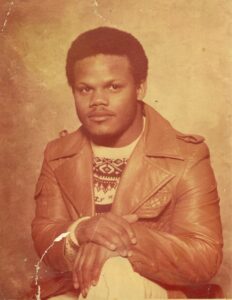 Jimmy Lee Crudup was born in Little Rock, AR on April 26, 1956. He was one of the 8 children born to late Everett and Martha Crudup. He joined First Pentecostal Church at an early age. Jimmy loved fishing, socializing, and spending time with his family and friends.

He attended Harris High School until school was integrated in 1969-1970. He graduated from

Jacksonville High School in 1975. His first job was with Pic-N-Pack. He then started working for

Buckeye Cotton Plant. On January 17, 1980 he started a family with Gloria Floyd-Crudup, and on January 18, 1980 a precious daughter was born to join the two of them in life. Buckeye closed, and he went to work for Smurfit Stone Container, Rebsamen Hospital, North Metro, and Unity until his passing. He was dedicated to his jobs, and very well known. He never met a stranger and was always the life of the party.

Jacksonville, Arkansas; two brothers Charles Crudup (Tina-deceased) of Beebe, AR, Marcus Crudup of Jacksonville, AR; two sisters Christine (Billy Dobbins) of North Little Rock, Arkansas, and Carolyn (Carwin Baker) of Jacksonville, AR. He also leaves behind a host of nieces, nephews, cousins, friends, and family, along with lots of nurses that met him at the hospital that he worked at. He will be greatly missed.